The Library’s facilities have seen many changes during the past 50 years. After initially operating out of two small storefronts, the Library relocated to a newly constructed main building in 1972, while still maintaining a small branch in a nearby community. During the 1980s, the library buildings could not support the level of service and programs provided or adequately satisfy the explosion of new residents migrating to the area. Recognizing the need for additional space, community residents overwhelmingly supported the passage of a bond issue to completely renovate and enlarge the main library, which was opened to the public in December 1986. In tandem with this expansion, the school district gave the Selden Elementary School to the library to serve as the Selden Cultural Center.

Once again, in the late 1990s, the Library determined that with every category of usage growing and the number of innovative community programs increasing, more space was needed. A bond was passed in 1999 to expand both buildings. The expansion, designed by Hardy Holzman Pfeiffer Associates (NY), of facility space by 40% enabled MCPL to maintain and nurture its position as a pioneer in library services. What began as a tiny library grew – and is still evolving — into two state-of-the-art facilities, boasting a combined total of 107,000 square feet. Some of the special spaces that are housed in the library include the Family Place, the Family Place training center, the Museum Corner, the Nature Explorium,  the Miller Business Resource Center, the Underground, and the Reading Garden. 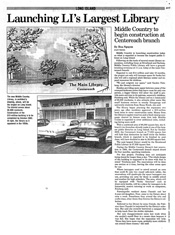